Recently, while fiddling around with my home network I got really tired of my old Netgear Wifi router and its limited functionality. After I found out that the revision I have doesn’t allow to run any custom firmware (dd-wrt or tomato), I decided to look out for something more open (and fun). I already used IPCop and so I started from there, thinking about building up a small computer to run IPCop. But having to dedicate a computer only for use as a home router/firewall sucks a bit… So after some further web research i bumped into the ALIX boards. Basically, they’re fully featured PCs on a single board allowing to hook up a CF card and to run a OS from there. Many people are successfully running the open source FreeBSD based firewall distro pfSense (an offspring of the m0n0wall firewall distro, which btw. also runs on ALIX systems) on it, so I decided to give it a shot. I placed an order for the required hardware on www.pcengines.ch (see “My system”) and after two days everything arrived. Building the system was good fun and after 15 minutes, everything was up and running.

Here you can see some building steps and a screenshot of the pfSense dashboard.

Before you install anything, make sure your board has a up-to date BIOS installed. To do so, connect the ALIX to your computer using a nullmodem cable (with Serial to USB if needed). I used minocom on my ubuntu machine, using the settings 38400 8N1, without flow control. The most current BIOS as I’m writing this article is 0.99h. If you have an older version installed, you should upgrade it (check the ALIX manual).

Installing pfSense is quite simple. Fetch the suitable image (which fits your CF card size) and flash it

Flashing the image to the CF card
I would recommend you to use a USB CF cardreader. Make sure, the CF is not mounted and get the correct device name of it. Flash the image with the following command:

pfSense allows to read out several parameters via SNMP

Reading the system uptime via SNMP

Even though, ActiveDirectory communication through a NATed (and port-forwarded) interface is not officially supported by MS, there is a way to do that. I stumbled upon this issue, after forgetting it for quite some time (solved it with a nasty hack in the first place – keyword: read only DNS entries)

Problem
DC2 updates its DNS record with its current IP address (real address)
DC1 can't reach DC2 through its real IP, instead it would need the address of the NAT interface.

The nice thing is, that the DNS server serves the address of DC2 that is suitable for the host. If the host is on the same network as DC2 it gets its real IP, if its on the other side of the NATed interface it gets the NAT interfaces address. 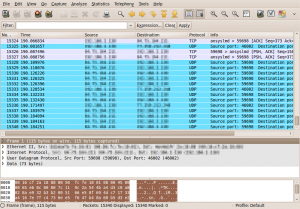 In a corporate environment, where you have several IT- security related regulations, it is critical to know what kind of wireless networks are in range of your facilities to avoid the bypassing of corporate security infrastructure (such as proxies, firewalls…)

This is where Kismet comes into play and assists you in finding rogue wireless LANs, using the monitor mode of your WLAN card.

You can get the software here: http://www.kismetwireless.net/
Kismet is open-source and also included in several security related linux distros.

The usage is quite simple. Just press “h” while the program runs to display a list of available keyboard shortcuts.

Here are some screenshots of Kismet in action

Hint (as fas as I know while using it under Ubuntu 8.10):
After closing the program, you might have to get your WLAN card back to managed mode.